Posted at 11:16h in Business by Scott Perry
Share

Boomtowns, characterized by prosperity and robust development, are often desirable places to put down roots and take out a mortgage. Economic growth provides employment opportunities and draws new residents. Some places, however, are growing faster than others. That’s why SmartAsset decided to find the cities in America where populations and job opportunities are rising rapidly.

In order to find the top 10 boomtowns in America, we looked at the most recently available data for 500 of the largest cities across the following seven metrics: population change, unemployment rate, change in unemployment rate, GDP growth rate, business growth, housing growth and change in household income. For details on our data sources and how we put all the information together to create the finals rankings, check out the Data and Methodology section below. 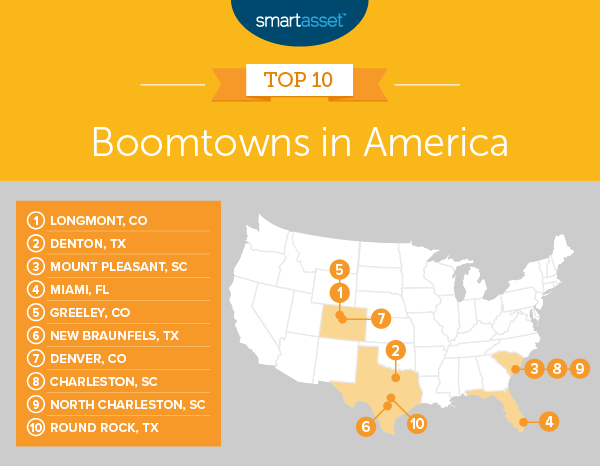 Longmont, Colorado – located northeast of Boulder – leads the way in our study on the top U.S. boomtowns. It ranks in the top 25% of the study for all metrics we considered. Its economy has been doing well, as it ranks ninth overall for its yearly GDP growth from 2013 through 2017, at more than 5%. Longmont has top-30 rates for its unemployment rate and high five-year housing growth rate, at 2.6% and approximately 18%, respectively.

From 2014 through 2018, the population of Denton, Texas increased by approximately 8%, and the city’s household income increased by more than 36%. Unemployment in the city decreased by 0.2% since August 2018 and was at 3.1% as of July 2019. Furthermore, Denton has a top-10 rate for its five-year growth in the total number of establishments, indicating that businesses there are doing well. Also home to two of the best school districts in the country to buy an affordable home, Denton ranks 38th out of all 500 cities in our study for its housing growth rate in the five-year period from 2014 through 2018, at approximately 13%.

Mount Pleasant, South Carolina also ranks within the top 25% of the study for all metrics and, as a result, takes the No. 3 spot in our study on the top American boomtowns. It ranks 20th overall and second-highest in the top 10 for its five-year population change, at 14.85%. It’s also within the top 35 out of all 500 cities in the study for its low unemployment rate, its high 2.7%; five-year establishment growth rate, at 11.84% and its high five-year housing growth rate, at 16.28%.

The population of Greeley, Colorado increased by almost 9% from 2014 through 2018, more than double the average population change of all cities in our study. Greeley ties with Longmont for lowest unemployment rate in the top 10, at 2.6%. Our data indicates that Greeley’s economy is thriving: The city experienced a one-year decrease in unemployment rate of 0.5% from August 2018 to July 2019 and an annual GDP growth of more than 5% in the five-year period from 2014 through 2018.

Located approximately 33 miles from San Antonio and 49 miles from Austin, New Braunfels, Texas does extremely well in terms of population change and housing growth rate, ranking fourth-highest overall and highest within the top 10 for both metrics. From 2014 through 2018, the population in New Braunfels increased by more than 30%, and the number of housing units increased by more than 41%. Furthermore, the economy in New Braunfels is on the rise, as the city ranks 15th overall for both its yearly GDP growth rate, at 4.75%, and its five-year establishment growth rate, at 16.45%.

Denver, Colorado ties with Mount Pleasant, South Carolina and North Charleston, South Carolina for the 35th-lowest unemployment rate in the study, at 2.7%. It also experienced a one-year decrease in unemployment rate of 0.6%, from August 2018 to July 2019, the second-largest decrease in the top 10, following only Miami, Florida. Furthermore, its GDP increased by more than 3% annually on average from 2013 through 2017. The city’s population increased almost 8%, and its number of housing units increased almost 11% from 2014 through 2018.

Be sure to check out our roundup of the top financial advisors in Denver if you’re looking to take advantage of the prosperity in this boomtown.

Charleston, South Carolina ranks within the top fifth of the study for all metrics except for five-year change in household income. In addition to its roughly 8% population increase from 2014 through 2018, Charleston has a top-50 rate for housing growth rate. It saw an almost 12% increase in both the number of housing units during the same period. It also has a top-40 rate for its establishment growth from 2012 through 2016, at almost 12%. Furthermore, the city’s unemployment rate, 2.9%, is the fifth-lowest rate for this metric in the top 10.

North Charleston, South Carolina sits just north of Charleston on the map but just south of it in our rankings. At ninth place in the study overall, it ranks in the top 25% of the study for six out of the seven metrics we considered. It ties for 35th for its unemployment rate, at 2.7%, and ranks 35th for its five-year establishment growth rate, an increase of approximately 12% from 2012 through 2016. Additionally, North Charleston’s population increased more than 10% from 2014 through 2018, and its average yearly GDP growth from 2013 through 2017 was more than 3%.

Round Rock, Texas rounds out our list of the top 10 boomtowns in America. Its population rose 14.52% from 2014 through 2018, ranking 22nd-highest overall and third-highest in the top 10 for this metric. In terms of economic growth, its average yearly GDP growth from 2013 through 2017 is more than 5%, ranking 12th-highest overall and second-highest among the other cities in our top 10. Also one of the best cities for living the American Dream, Round Rock’s business scene in particular seems to be booming. The number of establishments in the city increased by 20.32% in the five years from 2012 through 2016, the third-highest rate for this metric overall and the highest among our top 10 boomtowns.

In order to find the top boomtowns in the U.S., we analyzed data for 500 of the largest cities. We looked at the most recent data available for each of the following seven metrics:

Tips for Buying a Home